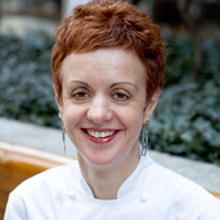 Vicki Wells left Emerson College to study under Madeleine Kamman, then later traveled abroad to study with the French masters at La Varenne. In the ensuing years, she gained experience while working in the kitchens of some of New Yorkâs finest culinary masters, including Sarabethâs Kitchen, Hotel Plaza Athenée, Maximâs, Montrachet, Le Bernardin and Trattoria DellâArte. In 2000, Bobby Flay invited Wells to take over the pastry departments of his restaurants, Mesa Grill and Bolo, and eventually, Bar Americain. Wells was one of Flayâs sous chefs on Iron Chef America on five seperate occasions, winning each time. She was listed as one of Pastry Art and Designâs Top Ten Pastry Chefs in America in both 2002 and 2003. Before coming to ICE in 2011, she was the Executive Pastry Chef at Buddakan. Wells describes her culinary voice as âmy own interpretation of the world of flavors that I have become familiar with through traveling, reading, and designing desserts for restaurants that have included American, European, Caribbean, Mediterranean, Asian, and Latin cuisines.â She adds, âInspiring students and broadening their culinary outlooks are the things that I enjoy about teaching. I try to get them to go out of their comfort zones and get them to start developing their own creativity in class.â