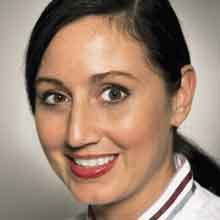 Jackie Newgent, RDN, CDN, sure has come a long way since her earliest childhood creation of bologna-potato chip canapés. Sheâs a classically-trained chef, registered dietitian nutritionist, award-winning cookbook author, professional recipe developer, food blogger, and media personality. Sheâs a lifelong fan of flavorful food. Her emphasis is on plant-based cuisine. Jackie is the author of The With or Without Meat Cookbook, 1,000 Low-Calorie Recipes, Big Green Cookbook, and The AllâNatural Diabetes Cookbook. She has been a recreational culinary instructor with the Institute of Culinary Education for well over a decade. Jackie is also a frequent contributor to Everyday with Rachael Ray and Coastal Living magazines. Sheâs been a columnist for top magazines, including Womanâs Worldâs âDiet Club,â Fitnessâ âHealthy in a Hurry.â and Glamourâs âEat More.â As a professional recipe developer her clients have included Food Network, The Mushroom Council, German Agricultural Marketing Board, and Sargento Foods. Television appearances have included ABCâs Good Morning America, NBCâs Dateline, and The Daily Buzz. Jackie is a former national media spokesperson for the Academy of Nutrition & Dietetics. Her unique recipe makeovers can be found on her blog, "Tasteovers by Jackie." Jackie received her B.S. in Allied Health Professions from The Ohio State University and Certificate in Professional Cooking from Kendall College. She resides in Williamsburg, Brooklyn.