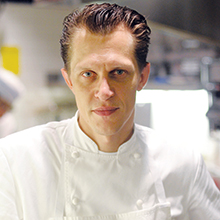 Michael Laiskonis joined ICE in 2012 fresh off of an eight-year tenure as Executive Pastry Chef at Le Bernardin. Laiskonis has long been one of the industry's most creative and talented chefs. He helped Le Bernardin earn four stars from "The New York Times" and three Michelin stars. He was named to America's Top Ten Pastry Chefs by "Pastry Art & Design" in both 2002 and 2003 and was "Bon Appétit's" Pastry Chef of the Year in 2004. Best known for his use of modern techniques to reinvent classic desserts, he was also awarded the coveted James Beard Award for Outstanding Pastry Chef in 2007. Most recently, Chef Laiskonis received the IACP's 2014 Culinary Professional of the Year Award, one of the most distiguished honors in the culinary field. Laiskonis has been an active writer, in print and on-line, including "Gourmet", "Saveur", and "The Atlantic" and has appeared on television shows such as "Top Chef: Just Desserts". While Laiskonis is best known as a pastry chef, he spent most of the first half of his career on the savory side of the kitchen. When asked about the path to finding his culinary voice, Laiskonis says: “I would have to say that my own culinary voice is a distillation of every environment I've been privileged to pass through and soak in over the last fifteen years. …After equipping students with a battery of fundamental knowledge, we can then tell more personal stories, inspiring through experience. I enjoy the process of identifying that inner drive in cooks, extracting it, and then guiding them along the path toward finding their own voice.”