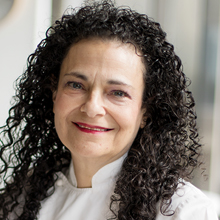 Chef Fraya Berg studied biology, chemistry and secondary education at Washington University, St. Louis, and worked as a biochemist for several years before attending the Culinary Institute of America, where she earned an AOS degree in culinary arts, graduating first in her class.â¨ â¨ The biochemistâs first job in the restaurant world was in high school, and she continued working in kitchens every summer during her college years. After graduating from the CIA, Chef Fraya held several kitchen positions, culminating in her stint as a chef in the café at Chez Panisse. After moving back to New York, she started her own eponymous catering company in Valhalla, New York. Chef Fraya has worked in food editing and recipe development for more than a decade at publications like Ladiesâ Home Journal, Redbook Magazine, Parents Magazine and Women.com. She applied her science background at the Good Housekeeping Research Institute in 2007 and wrote and edited content for Meredith Xcelerated Marketing from 2005 to 2018.â¨  â¨In 2013, Chef Fraya worked on the cookbook, âCookies for Kidsâ Cancer: All the Good Cookies,â developing and testing the recipes, and sheâs supervised the culinary aspects of the annual Chefs for Kidsâ Cancer Gala Fundraiser since 2014.â¨ â¨Chef Fraya trained students at two Culinary Institute of America restaurants as an assistant instructor from 1985 to 1986, and taught recreational cooking classes for group tours, private clients and charity events at The Silo (now Hunt Hill Farm) in New Milford, Connecticut, from 1990 to 1995. She began as the lead chef for ICEâs recreational program in October 2018.